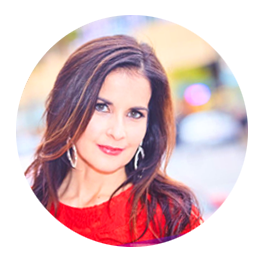 Millions of people see Stacey J. Aswad, 24/7, on TV as the Host for Walt Disney World’s “Top 7 Must Sees” and “Must Do Disney”!

Some of her TV, radio and theatre credits include Adventures in Odyssey, Discovery Kids, 7th Street Theater, One Tree Hill, Notes from the Underbelly, Me & You, Us Forever, Five Women Wearing the Same Dress and Carrie Ann’s Kiss.

She was also the In-show Announcer for Season 3 of the game show, Family Game Night airing on The Hub / Discovery Family.

Stacey has won five national championships in artistic roller skating and she wore the same skates to host home games for the WNBA’s Los Angeles Sparks at the Staples Center in L.A.

She has a BFA in Dance from the prestigious Juilliard School in New York City.

She hosted the award-winning documentary “Finding Kraftland” that screened in more than 80 film festivals around the world.

Many of her former dance students from the Youth Performing Arts School have gone on to become superstars in pop music, film, television, Broadway, professional dance companies and dance education.

Why should you watch VO Buzz Weekly with host, Stacey J. Aswad? Because She’s Awesome

Sign up to our newsletter and be the first to get updates on exclusive content, advice, news and giveaways. Past giveaways include: coaching, studio gear and agent representation.
We use cookies on our website to give you the most relevant experience by remembering your preferences and repeat visits. By clicking “Accept”, you consent to the use of ALL the cookies. Otherwise, please choose which cookies you will allow.
Cookie SettingsAccept
Manage consent

This website uses cookies to improve your experience while you navigate through the website. Out of these, the cookies that are categorized as necessary are stored on your browser as they are essential for the working of basic functionalities of the website. We also use third-party cookies that help us analyze and understand how you use this website. These cookies will be stored in your browser only with your consent. You also have the option to opt-out of these cookies. But opting out of some of these cookies may affect your browsing experience.
Necessary Always Enabled
Necessary cookies are absolutely essential for the website to function properly. These cookies ensure basic functionalities and security features of the website, anonymously.
Functional
Functional cookies help to perform certain functionalities like sharing the content of the website on social media platforms, collect feedbacks, and other third-party features.
Performance
Performance cookies are used to understand and analyze the key performance indexes of the website which helps in delivering a better user experience for the visitors.
Analytics
Analytical cookies are used to understand how visitors interact with the website. These cookies help provide information on metrics the number of visitors, bounce rate, traffic source, etc.
Advertisement
Advertisement cookies are used to provide visitors with relevant ads and marketing campaigns. These cookies track visitors across websites and collect information to provide customized ads.
Others
Other uncategorized cookies are those that are being analyzed and have not been classified into a category as yet.
SAVE & ACCEPT
Powered by